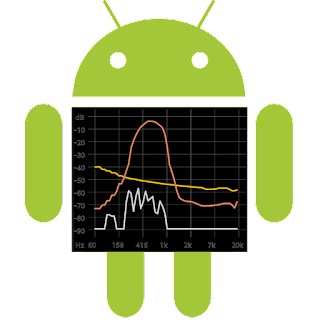 Worf is an advanced audio recorder and spectrum analyzer allowing you visualize and manipulate sound in a unique and powerful way.

Watch as the spectrum analyzer displays real-time audio data coming in from your device's microphone.  Then use your finger to draw a threshold over top of the spectrum.  When you press record, only the segments of audio that cross your threshold will be captured in the record file.  Quieter sounds are eliminated for seamless playback of only the louder audio.

Use the filter like an equalizer on steroids.  Draw any curve you like to soften or eliminate unwanted frequencies and alter the tone of your recording.

Worf may also be used as a standard voice recorder by leaving the threshold and filter at the default settings.

Worf outputs your recordings in MP3 format for reduced file size and longer capture sessions.  Some MP3 file types may be opened for playback as well allowing you to visualize the spectrum of your favorite songs or other recordings. 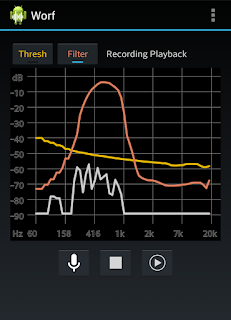 Although the FFT algorithm runs in real-time on all audio data, only one out of every four data sets is actually displayed in the graph.  The x-axis is a custom log scale while the y-axis is in decibels.

Audio / Voice Recorder
Worf functions as a standard voice recorder by simply using the microphone button to begin a recording session followed by the pause and stop buttons to complete a session.  The recorded data may be played back immediately with the play button, or saved to file in the menu options.

The default settings for thresholding and filtering should not impact the recorded audio.

Threshold
With the Thresh button active, use your finger to draw over top of the frequency spectrum.  Set the threshold level such that the desired audio volume spikes over the line and quieter volumes stay below the line.

The next time you use the audio recorder, only volume spikes over your threshold level will be recorded.  When you play back the file, you will hear each recorded segment back to back with no dead time in between.

Filter
With the Filter button active, use your finger to draw over top of the frequency spectrum.  Shape your filter in a manner similar to an audio equalizer.  Lower filter values will eliminate the corresponding frequencies while higher values will leave them unchanged.  Note that the filter will not boost the volume, only decrease the unwanted frequencies.

Keep in mind that the filter values are in decibels.  A good rule of thumb is that every 10 dB is roughly half the volume, so setting your filter down to -60 dB or more will effectively silence the corresponding frequencies.

Save / Open
Under the menu are options for saving recorded audio as well as opening previously saved audio.  Worf uses the MP3 file format to keep sizes down on longer recording sessions.  Your Worf recordings should open with any MP3 player on your device.

Worf may be able to open some of your other MP3 files depending on the way they were encoded.  If Worf is able to read the file, you can see the spectrum as it plays.

Credits:
Icons for Open, Record, Pause and a portion of the logo are from https://icons8.com/
FFT algorithm from Digital Signal Processing Tools by Laurent de Soras (c) 1999
MP3 engine from LAME by Mark Taylor (c) 1999